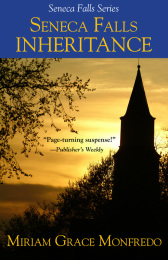 
During the Women's Rights Convention of 1848, a body turns up in the canal -- and town librarian Glynis Tryon stands up to a killer.

From Publishers Weekly
In her historically authentic and cleverly entertaining first novel, Monfredo skillfully meshes life in Seneca Falls, N.Y., immediately before the First Women's Rights Convention in 1848 with a page-turning suspense story. Charming spinster librarian Glynis Tryon, like her fellow townspeople, is shocked by the sudden deaths of wealthy Friedrich Steicher and his wife, but she is more surprised by the appearance of a woman who says she is the daughter Steicher never knew. Before the woman can prove her allegation, however, she is murdered. Although suspicion falls heavily on Friedrich's only son, Karl, he denies the woman was his sister, even when her husband comes to town to lay a claim on the estate. Unofficially deputized, Glynis questions those who might have spoken to the woman, and continues the investigation of a second, related murder when the sheriff becomes ill. Historical figures, foremost Elizabeth Cady Stanton, are woven seamlessly into this well-modulated, satisfying tale. 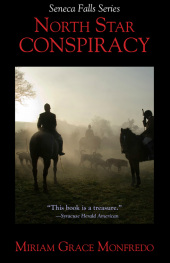 
Glynis Tryon, the delightful Seneca Falls, New York, librarian introduced in Seneca Falls Inheritance (SMP, 1992), returns, still balancing her own life against the momentous events of the times. With sure authenticity, the author evokes the atmosphere of 1854, seven years before the Civil War, and brings to life the vivid cast of characters involved. A local election is pending, from which Glynis and Elizabeth Cady Stanton hope will come gains for women's rights. A wealthy resident has started Seneca Falls's first theater, and its production of Macbeth looms large in the story. Glynis herself faces a wrenching decision: Constable Cullen Stuart wants her as his wife when he moves west to become a Pinkerton man. Warm as her regard for Cullen may be, Glynis is reluctant, knowing how her life must change after marriage. Meanwhile, Seneca Falls has become an important stop on the Underground Railroad. Fugitive slaves following the North Star to Canada find support from many of the town's inhabitants, including Glynis. It is a difficult commitment at best, and when complicated by murder, a perilous one as well. Once again, Miriam Grace Monfredo has combined historical events, a moving personal story, and an engrossing mystery in a work of extraordinary interest. 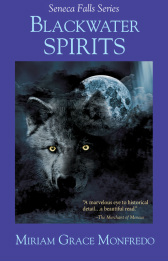 
With her series of books that feature the spirited librarian Glynis Tryon, Miriam Grace Monfredo takes her readers into the life of the small town of Seneca Falls, New York, a microcosm of mid-nineteenth-century America. Seneca Falls Inheritance illuminates the birth of the struggle for the rights of women; in North Star Conspiracy, Glynis is involved in the turbulence resulting from the fact that Seneca Falls was a stop on the "Underground Railway" for escaping slaves. Now Monfredo continues her stirring story of Glynis's life and the country's history. In Blackwater Spirits, Jacques Sundown, the half-Iroquois deputy, is accused of murder, and his trial points up the fear and prejudice felt for Native Americans, while Monfredo, with impeccable historianship, clearly shows the Indians' side of the cultural clash. The author also introduces a young female physician, initially resented not only as an intruder in the jealously guarded male profession, but as a Jew from New York City to boot. And as a seriocomic reflection of the times, the inhabitants of Seneca Falls are aroused, pro and con, by the rage for spiritualism and the passions of the Temperance movement. 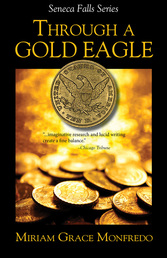 
The year is 1859. The nation is divided over slavery, with abolitionists spearheading a relentless - and violent - plan of attack. And in Seneca Falls, New York, the federal crime of counterfeiting adds up to a deadly account of deceit, injustice, and murder. After a year in Springfield, Illinois, Glynis returns home with Emma, her shy, seventeen-year-old niece. Emma's only joy comes from sewing and playing the dulcimer - and little else since her mother died. Glynis hopes that a change of scene will help young Emma's spirits. But as their train journeys from Rochester to Seneca Falls, a passenger is fatally stabbed right before their eyes. Before he dies, the victim hands Glynis a pouch containing a signet ring, a crumpled bank note, and a twenty dollar gold eagle coin. 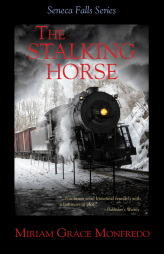 
The acclaimed mysteries of Miriam Grace Monfredo have fascinated readers by bringing to life one of the most exciting eras of our nation's history, and the adventures of a small-town librarian named Glynis Tryon... It's the eve of the Civil War, and Glynis Tryon's niece, Bronwen, has joined Pinkerton's Detective Agency. While on her first assignment in the South, two agents are murdered. When word reaches Seneca Falls that Bronwen is in trouble, Glynis heads south--and finds her niece caught in the midst of a diabolical plot designed to strike at the very heart of the United States government.